A little over five years ago, Travis (my amazing husband) and I made the really difficult decision to move away from our family and our friends.  At the time, it was the best choice for us, and our boys.  We’ve made a few long distance moves since that first one, and when we settled our feet in our current home, I couldn’t honestly see ever wanting to leave.  Ha ha ha!!!  Guess what?  Now, there are days when that is all I can think about… all WE can think about.  So enough thinking; time for action!  That is, as most things are, easier said than done, but we’re working out the plan; one step at a time.

I will not go so far as to say that I regret moving in the first place, I can’t say I truly regret any of the moves we’ve made since.  I’ve learned so much about myself along the way.  I found an inner strength I didn’t know I had, though it truly helps that I had Travis to lean on.  I learned that I DETEST prairie winters, and SK never felt like home.  We’ve learned that we can face the good times as well as the bad times together, and come away stronger for it.  But perhaps the most important lesson learned:  None of it is worth a damn, without family to share it with.  And that email, video chats, google + and/or a phone call, can never compare to an actual, honest to goodness, face to face visit.  They can help fill the void, but they can never completely cover it.  I always knew that my family was important to me, moving away helped show me just how MUCH it matters.  Life is way to short to not be able to share it with those closest to you.  Life is so unpredictable that grabbing all those moments when you can is a priceless gift. Being close enough to share the good, the bad, and the beautiful with those we love best, has become our new mission.

To that end, we’re working away at nailing down a time line, and figuring out all the details, researching areas we think we might want to live in, inspecting the job markets, housing markets, (both to rent and to buy)  all the little things, as well as the big.  We know we probably won’t be “pop over for coffee” close, but we’re aiming for “head down for the long weekend” close.  And while we’re still looking into all those pesky rather important details, I’m turning my focus onto what I can do to get our house ready for sale, and also ready to be packed up.  I’m putting everything I’ve learned from each of other moves to good use, and I thought I would share my adventures with this move with all of you.

Since we have no deadline yet, I’m going to take advantage of that and start with areas that I’ve been meaning to get to, but always put aside for something else.  First up, our document storage and filing system.  It’s not as bad as it could be, but I know I can make it better.  Also, I really don’t want to drag a bunch of paper crap with us.  We’ve gone paperless in as many ways as we can, so I think it really is time to have our file box show that.

So, armed info from Mrs. January’s post on How Long to Hold on to Financial Recods in Canada, as well as Revenue Canada’s Keeping Records area on their website, as well as my own thoughts on this, I’m taking on the mission of getting our Paper Crap in order.

Here’s some pics of step one:  Gather up all the paper stuff to be sorted, the items to store them in, and (because I can’t resist “shiny” moments) a few odd ball things that in my brain went with the label “Paper Crap” 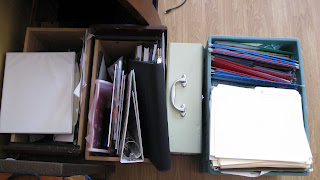 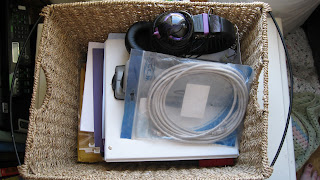 That’s the sum amount of what needs to be sorted!  Crazy huh?  Considering the massive amount of paper type stuff that I used to hold on to, I was pretty surprised when I rounded this up and realized that we had so little.  And, I say rounded up, though truthfully most of what you see is where I found it.  I pulled the file crate, extra folders, and accordion file out of the trunk where we were keeping them, and the items in the drawers were already in them, tucked away out of sight, and I had just been using most of what is in the “Often Used” photo. That makes me totally giddy!  (If you’ve known me for a while, you’ll understand the triumphant giddiness)

On that note, I think I’ll end this longer than planned post, and I’ll be back either tomorrow or Friday to reveal the after pictures, as well as another little project I’ve been working on!  See you soon!!!!

First, I would just like to say I’m sorry I didn’t get these posted on Friday.  I got hit with a nasty migraine that afternoon, and got busy with the family during the weekend.  But I did get my first “Operation Move” project finished.  I opted to start with the Paper Crap, lol, and this…

Hi there!  This cold is still making the rounds around our house.  I find myself tiring really easily, but I’m antsy at the same time.  I want to be up doing … something … anything… but my body has other ideas lol.  So, I decided to put some of that desire to good use, and…

Happy Monday everyone and a belated Happy Mother’s Day!  I hope you all had a great weekend.  I had one of those weekends where I thought I had bitten off more than I could chew, but in the end the results were so worth it.  If you’re reading this post via email or RSS then…