Happy November everyone!  It feels so good to be able to sit at my computer again without all the aches and pains and blinding headaches that came along with whatever nasty bug it was that I caught.  I thought today I would just touch on a few little things, bring everyone up to speed, so to speak.

Firstly, the 31 Days to a Clean and Organized Kitchen is done.  I wrestled with this decision while I was sick, and decided that instead of trying to finish it up this week, I would just let is die its natural death.  I learned quite a bit from taking part in the challenge.  The most important lesson I learned though was that while doing everything in real time is a nice idea, having some posts pre-written for those “just in case” moments would have been a better way to do it.  Live, learn and try to do better next time right?  There was one more printable I made up to share during the challenge, and I’ll be sharing that one on Friday.

Next up, the kitchen binder cover page.  Because I was down for more than a week, I decided to keep that one available until Friday.  If you did have a chance to put in your request for your free personalized cover there is still time to do so.  You can find the form at the bottom of this post here.  If you have already put in your request and are wondering if I forgot about you, do not worry.  I have not forgotten.  The cold/flu or whatever it was that I had made my eyes rather sensitive and it was just too painful to look at the computer screen, but I will be working on getting them out to you today.

Now, on to the good stuff.  Since the 31 days series is now over, it’s time to get back to regular blogging.  I have some fun stuff planned for this month.  This week I’m introducing two new monthly feature (look for the first one on Wednesday).  I have a few printables waiting for their turn in the spot light and I’m working on a new organizing project and a couple of what works for you posts.  On top of all that I’m working on organizing the printables page a little better, and I’m hoping to update the about me page.  As it is now, it’s horrible.

So that’s what on the agenda for this month.  I’m terribly sorry about the unplanned bloggy break last week.  Whatever that bug was, it was not very nice.  Thankfully, only two of us were sick.  Unfortunately, it was Travis and I who came down with the bug, so as you can imagine the house is suffering from lack of attention.  Which is where I’m heading now.  If I put it off much longer I’m afraid something will come up that requires my attention and the mess will multiply behind my back.

What have you been up to lately?  Do you have any plans for this month? 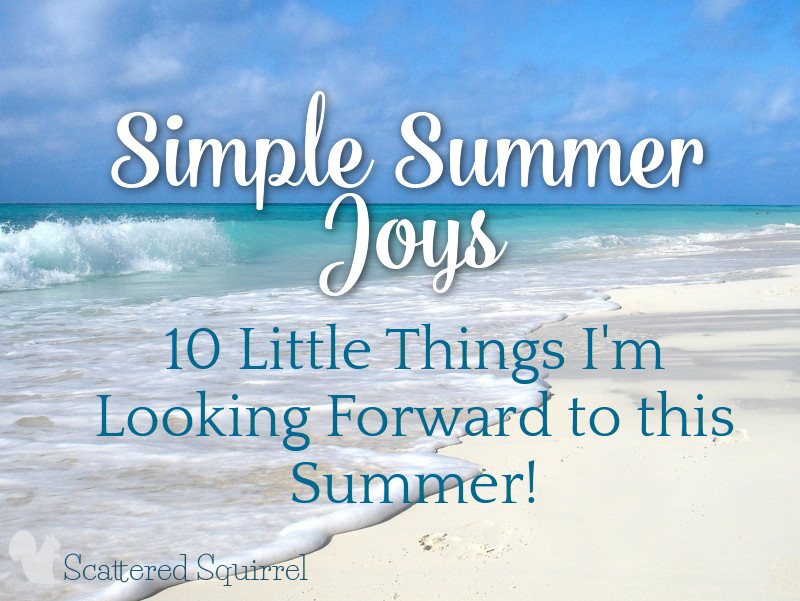 The school year is winding down and soon all the crazy end of year stuff will be over and summer vacation will be starting.  I have to admit, I’ve been feeling a little behind the ball when it comes to planning our summer.  I mean my social media feeds are all full of these amazing…

I didn’t post one of these last month, because I didn’t read anything new.  Not a new author, not a new book by an old favorite . . . nothing new.  Which, at the time, seemed to mean nothing to write about, but oh, I was sooo wrong.  You see, I’m a repeat reader.  I…

I disappeared again!  I know, I know, I know, but we set ourselves a very strict deadline for Operation Move, and I’m here with an update!  Remember waaaaay back when, when I first posted this?  Well guess what ….. I cannot believe it is finally happening…. it feels like forever since we first started this…

Do you ever have one of those moments when you realize you have vastly underestimated something?  When your stomach seems to drop out of you, adrenaline begins surging, and you fly into a tizzy in a desperate attempt to compensate for lacking of planning?  That was me at 9 am this morning! Today was our…

Happy Friday everyone!  Are you ready for the weekend?  I know I sure am.  The craziness of the end of the school year is upon us here, and I’m ready for some rest.  I know the boys are too.  I’m off on a field trip with Liam’s class this morning, so I thought I’d keep…

… A good book, or three!  I love to read!  Books, blogs, magazines…. doesn’t matter, I just love to read.  I can’t pick a favorite genre, I seem to like them all, or at least I can find books and authors in them all that I like.  lol  So where is this going?  Well, they…