Large projects intimidate me.  I tend to spend oodles of time planning them, thinking about them, searching for inspiration for them… in short, procrastinating!  Why?  Well, the problem is, I never know where to start.  I get stalled before I even begin.  I’ll go round and round in circles until I’m dizzy, and still no where closer to the end goal.  Or I’ll jump in without giving it enough thought, and end up with a project that takes five times as long as it should.  And now, I’m staring down the biggest project I’ve ever tackled:  getting our home ready for sale!  The moving part doesn’t bug me, I’ve been down that road quite a bit in the last 6 years, but selling our home… WOW!  That seems so HUGE!

I know that a well organized home will show well, and that’s something I can easily tackle now.  It’s good motivation to get to those projects that I’ve let slide by.  But, where do I start?  Every room needs a fresh organized solution.  Especially since I’m not organizing just for the sake of order in the home, or to make day to day life easier, but to show our little home to the best of its potential.  After much back and forth, and walking room to room taking mental notes, I decided that the best place to start is the heart of our home: the kitchen.

Like the rest of our home, our kitchen is tiny, but it does have a pantry, which is its saving grace.  Though, as the before pictures will show, how we (and by we I mean me) utilized the space wasn’t exactly the best.  It worked in theory, but in practice it was another thing.  For now, I’ll let the pictures do the talking for me.

Firstly, though it was working for us, the stuff on the counters, above the cabinets, the armoire turned bakers cabinet, all add up to a cluttered mess.  Functional yes, show worthy … nope!  (excuse the dishwasher, it was working hard that day)

So, the problem with this area is that it’s not something most people would do.  When we got our portable dishwasher, I decided to take out the bottom shelf of the pantry so that I could tuck the dishwasher away when we were done with it.  And it made sense to have the dishes stored above it, to make unloading easier. This is one of those things that in theory, worked great, in practice, it sucked!  We hardly ever put the dishwasher away, it’s too handy as extra counter space, and well, the photo below will show you the problem we had with the pantry stuff’s new home …

Yeah, NOT a pretty sight.  It was a daily chore to keep it organized, and as you can see, I sort of gave that up.  It just wasn’t working.  We either needed to put in a lazy susan, or come up with a better idea.

Just a peek inside the armoire to show that it was indeed a hard working item.  Not as neat and tidy as I would like, but our Teen had just put away the dishes, and he doesn’t so much care about what our cabinets look like on the inside.  lol  Oh well!

And now, with a little elbow grease, a whole lot of decluttering, and packing away the non-essentials and the extras, here is where our kitchen is at now.

Most of what was stored in the armoire got packed.  I kept out the items I know I’ll use between now and moving day, but to be honest, I’m going to be too busy to spend a ton of time baking.  (Don’t worry, I have another home for the armoire already, and I plan to put it to good use.)  A few other fixes; I removed everything from above the cabinets, limited the number of cooking utensils to one urn, and moved the spices we use most often to above the stove.  (the cake on the stove top won’t be there much longer lol)  I have an idea for the microwave that I’ll explain in a moment.

This part was a no-brainer, just remove the stuff from the counters.  The only things left are the kettle and paper towel, and of course the dish washing stuff, which will be getting a container to hold it, and then I can tuck it under the sink when we have people coming to look at the place.

I cleared off the top of the fridge, and the front and sides.  It’s hard to see in the photos, but all that is left on the front is the calendar, my cleaning schedule, a pen holder and a clip for important notices and such.  The stickers all over the front still have to come off, but I need to pick up some more cleaner for that.  lol  When it comes time to show, I can quickly remove the items on the front and store them away until the showing is done.

Here is the pantry turned pantry again … everything is soooo much tidier than in the corner cupboard.  The space at the bottom is my idea for the microwave.  I’m thinking of putting the bottom shelf back in and storing the microwave in there.  We don’t use it much this time of year, so really it’s just sitting useless.  My other thought was to just clean it and store it in the shed with all the other “ready to be moved” items.  I’m not sure yet as I’m also thinking that it might be a good idea to store the dishwasher in here for viewings  …. anyone have any thoughts on this?

And here is the top part of the pantry.  There is plenty of space here for a well stocked pantry.  I’m going to try not to stock it too full so that potential buyers can get an idea of the space.  I haven’t labeled anything as yet (the old labels need to come down)  it’s not even on my to do list at this moment.  Wanna see what I did to the cupboard?

The rest of the dishes were in the dish washer when I took this, but it gives you an idea of how it’s all set up.  The dishes really do work much better in here than the pantry items.  The top shelf is pretty empty.  I just don’t have anything to keep up there other than my hand mixer and the liquid measuring cups.  This cupboard makes me smile every time I open it!  It caused some other shuffling of items in the kitchen, but in the end, I’m thrilled with how it turned out.

So, now that I’ve decluttered the kitchen, what’s next for this space?  Well, we’re replacing all the handles on the cabinets, I have to clean under and behind the stove and fridge, and umm… did you happen to notice the lack of window covering?  I need to come up with an inexpensive idea for that.  Windows coverings are not the strong point in this house.  When we bought it, all the windows had those faux wood blinds, and they became safety hazards, as in, to pull them up you really needed to wear a hard hat.  They were too heavy for the size of the windows, and over time they broke!  It would have been ok if they let in light when just twisted open, but with very little direct sunlight coming in, they made the home seem dark in the middle of a sunny day!  And that is pretty much it.  We’d love to paint over the “antique red” (I call it pink) walls, but there are other areas in the house that need attention first.

Any thoughts you’d like to share?  Is there room for imporvement?  What would you do with the microwave?  Any ideas for inexpensive window coverings?  I would so love to hear your thoughts and advice…. I’m fastly running out of ideas.

I hope that you all are having a wonderful day.  I’m off to tackle yet another room.  Wish me luck!!!

Every few weeks I send out a newsletter with links to all the newest posts and printables!
With your subscription, you also get access to our Secret Printables Library!
Don't miss out on the fun!

Hi there I'm Alli, as a recovering clutterbug I know, first hand, what a struggle it can be to find harmony in the chaos. It's why I like to share my thoughts, tips, tricks, and ideas to help others find their own approach to everyday life. Read More…

By filling out the form below and clicking go, you are agreeing to share your email address and name with us for the purpose of sending you periodic newsletters to share new posts, printables, and special offers with you. You can see our privacy policy for mote details.

You can choose to unsubscribe at anytime.

As an Amazon Associate I earn from qualifying purchases.
For more information, please see my disclosure policy. 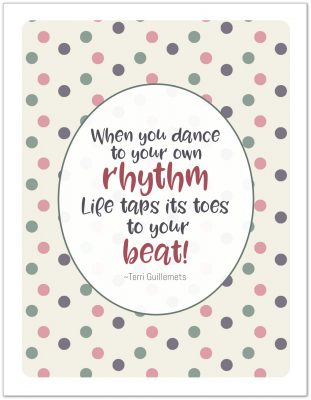 By filling out the form below and clicking go, you are agreeing to share your email address and name with us for the purpose of sending you periodic newsletters to share new posts, printables, and special offers with you. You can see our privacy policy for mote details.

You can choose to unsubscribe at anytime.