Oh it is so good to be sitting here typing up a post instead of spending hours searching for solutions to problems.   Never let it be said that blogging isn’t full of fun, if somewhat frustrating, adventures!   Today’s post was supposed to be more Home Management Printables, but I’m afraid that had to get put on hold for something a little more pressing.

I don’t know if any of you noticed some of the glitches that cropped up in the past few days, but boy I sure did!  First there was the double comment areas.  I still don’t know how that happened. At first, we thought it was one of the behind the scenes plug-ins I installed, but removing them one by one didn’t fix the problem.  I searched high and low for some explanation and solution, and Travis spent hours scouring message boards, help forums and other areas looking for the same thing.  We both came up empty-handed.

While we were busy seeking answers to that problem, another one cropped up.  I noticed it for the first time yesterday.  It seems that my side bar developed a mind of its own and wanted to be in the main content area under the posts and pages.  No matter what I did, it just did not want to go back to the side where it belonged.  (doesn’t it know that I’m the boss here, and what I say goes?)  However, it did solve the double comment area issue… kind of.  Whatever caused the side bar to move also caused both comment areas to disappear.  lol  Oh it was not a fun day!

I was getting frustrated and angry with myself.  I’m pretty sure it was something I did that caused this to happen.  I just wish I knew what it was.  After spending all that time looking for the answer, Travis suggested I switch to a different theme, just to see what that did.  (If you happened to come to the site when I did that, I’m sorry if it confused you!)  Guess what, like magic, everything was where it was supposed to be.  Which lead to a lot of “Uh-Oh”s and “Oh Noooooooo”s.  I didn’t want to switch themes.  I spent MONTHS trying to find a theme I liked that offered enough flexibility, until I can create my own.  Thus began the frantic search for another theme, which turned up zip.  I could not find one I liked.  (There are BIG disadvantages to working with free themes on WordPress, this is just one of them! )

A lot more boring stuff happened,  and this post is getting long enough, so I’ll cut to the chase.  We decided to try deleting the theme from the site and then reinstalling it.  Since I was pretty sure I was going have to re-enter all my choices and tweaks all over again, I took the opportunity to change things up a bit.  So, I put the site into maintenance mode (I’m really sorry if you stopped by during this time, there was just no way I could make all the changes while having the site up and running) and, well, you can see the end result!  One comment area, side bar where it’s supposed to be, and a new color scheme (hopefully this ones translates better from one browser to the next, as well as from one device/computer to the next). It’s a little lighter, a little brighter, and a little more nature inspired.  (I cannot be the only one who found the purple, blue and grey scheme dark and kind of dreary!)  I’m just going with what looks good on what I have to test it on.  If any of the colors look weird to you, please let me know!

We almost didn’t make it through this one.  At some point after putting the site into maintenance mode, and reinstalling theme, the server that houses our site decided it didn’t want to let me on.  It timed out and I spent a good hour trying to get back on.  If I thought I was frantic before that, I was in panic mode when that one happened.  Let me tell you!  I was ready to cry.  Thankfully, it all worked out in the end, obviously, and I’m already looking back at the last couple of days with a smile.   I didn’t have problems like this one on Blogger, but then again, I didn’t have as much control over the site either.  And to be fully fair and honest, I’ve been expecting a hiccup or two in these first few months on WordPress.  I didn’t expect to have quite so many happen at once, but we live, we learn, and we do better next time.  (I still don’t know what caused the problems, but I have learned not to do whatever it was, ever again!  lol)

I’ll be back tomorrow with the final printables from my Home Managment Binder.  I haven’t forgotten!  Until then, I hope you all are having a great and fabulous day!

So, what have you been up to?  Ever run into problems that totally stump you?  Have you ever had one problem lead to another and then another?  How did you cope?

A little over five years ago, Travis (my amazing husband) and I made the really difficult decision to move away from our family and our friends.  At the time, it was the best choice for us, and our boys.  We’ve made a few long distance moves since that first one, and when we settled our…

****Apparently, the ‘Save Draft’ button is not the same as the ‘Publish’ button.  Who knew?  🙂  Sorry this didn’t go out yesterday as it was supposed to!****   Yesterday I shared with you all how sometime things get crazy and chaotic in my little world, and I ended the post by telling you that it…

***** Warning:  This post is going to be picture heavy ***** Well, I’m two days into my “Around the House in 40 Days” challenge, and I’ve got the first project done!  Woo hoo!!!  I decided to start with the office and craft stuff because when those are in order, everything else seems soooo much smoother…. 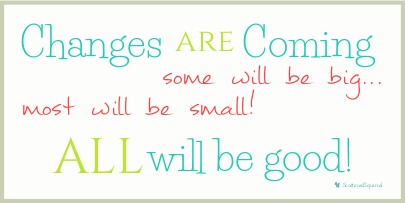 Happy Monday everyone.  I hope you all had a wonderful weekend.  It was a gorgeous weekend here with temps soaring into the high teens (low 60’s for those on Fahrenheit) with beautiful sunny skies.  We took full advantage of that and sort of just unplugged a bit for the weekend.  It was actually kind of…

Have you ever looked around your home or your life and wondered when it all got so chaotic?  Felt overwhelmingly helpless or frustratingly confused by what you see or by wondering hoe you got there?  Well, you’re not alone.  I’m there right now.  Actually, here and I could be considered very good friends.  You see,…